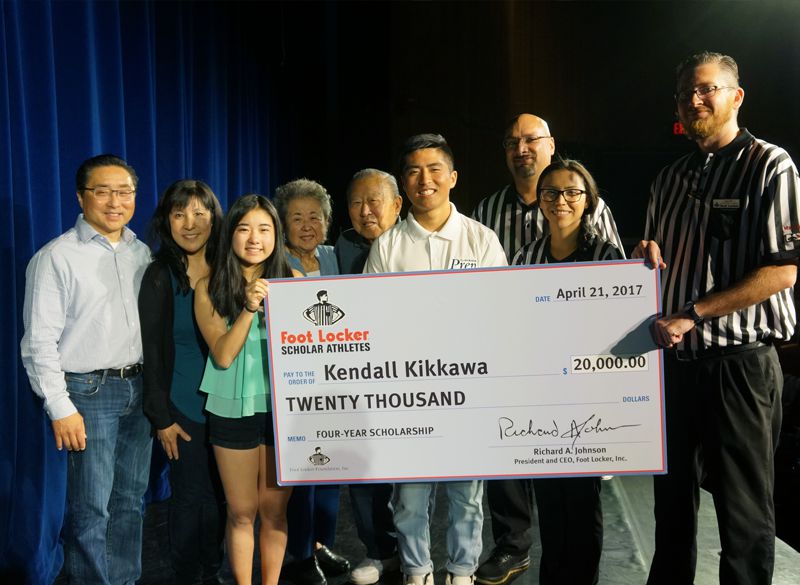 According to Foot Locker, the scholarship, awarded as part of the Foot Locker Scholar Athletes program, is given to 20 students each year who demonstrate academic excellence and exemplify strong leadership skills both in sports and within their communities. Kendall was chosen from a pool of 37,000 applicants. He is the only student in the LA area to receive a scholarship this year.

Kendall is a three season varsity athlete (football, basketball, baseball) who is both a tough competitor and a gentle leader. A member of the school’s Athletic Council on Leadership, his down-to-earth attitude and strong work ethic make him a pleasure to be around. He is also involved in community endeavors through Changing the Community/AAPIP. He has done service work in Nicaragua for the last two years, and traveled to Japan as a member of a goodwill basketball team, where he met with tsunami survivors. Closer to home, he tutors at the Boys and Girls Club and helps host Special Olympics activities on the Prep campus. He wants to put his interest in math and science to use and study sports medicine or biomedical engineering in college.

Director of Athletic Initiatives Alex Rivera says Kendall’s dedication to his peers, teams, teachers, coaches and community is obvious in his daily attitude.

“A leader makes everyone around him better, leads through desire and passion—not just by words. A leader is one who puts others first, before himself. That’s who Kendall is, a leader from the heart,” he added.

Athletic Director Garrett Ohara, who is also Kendall’s varsity basketball coach, said, “Kendall has the heart of a warrior, someone who will do whatever it takes to get his team to compete. He serves as a leader, modeling exemplary behavior.”