Alums in the food world make it work during a pandemic

COVID-19 changed our relationship with food.

As the pandemic took root and worsened, essential workers who grow, pack, and distribute our food became especially vulnerable to infection; many who cook and serve meals lost livelihoods when restaurants were locked down. All these events exacerbated food insecurity and access issues that were already at a peak in Los Angeles and in other parts of the country.

At the same time, those who could turned to making food as a form of comfort, whether it was baking sourdough or growing their own vegetables. And plenty of people in the food industry got creative to stay afloat and help their community. And though carefree gatherings in restaurants and bars were suspended, lucky pods and families recreated some of what was lost: conviviality, spontaneity, and discovery. Through these societal lenses, we have come to see that food truly sustains our community in myriad ways.

We’re featuring two alumni families who turned the lemons handed to them by the pandemic into something delicious: community, compassion, a representation of culture, and some darn good food.

Supporting Little Tokyo, One Meal at a Time 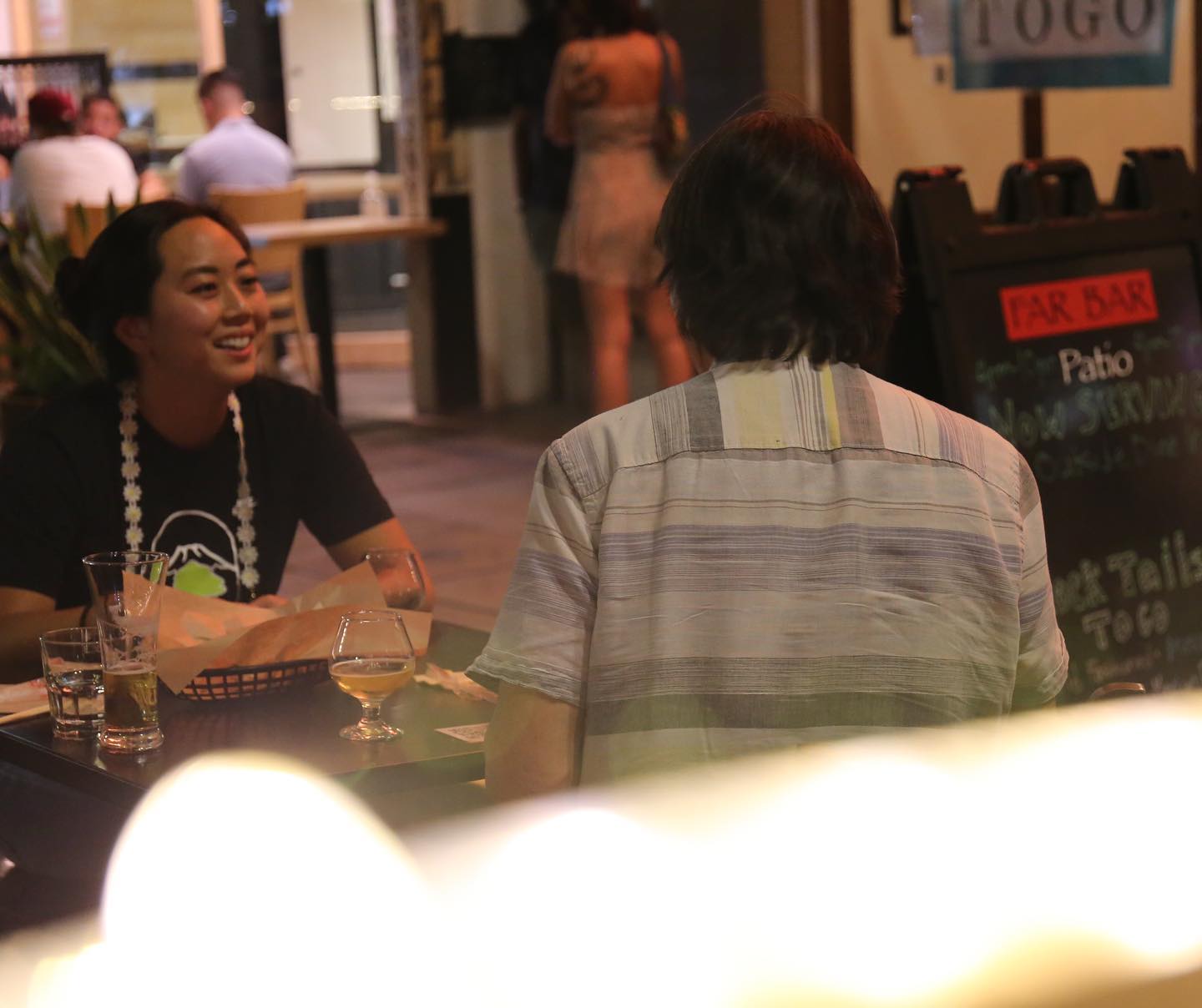 For Jill Tahara ’08, “food is second nature.” Her father, Don, has been a caterer (for George Takei’s wedding!) and restauranteur in LA’s Little Tokyo for many years.

The historic restaurant, the Far East Café, had an iconic neon sign advertising “Chop Suey,” which was the inexpensive and nourishing dish the restaurant served, on credit, to returning Japanese-Americans who had been interned in World War II. Don revived the restaurant and kept its connection to the Little Tokyo community, calling it the Chop Suey Cafe as a tribute to the sign. Jill worked there throughout high school and college, and eventually in graduate school, when it morphed into hipster destination Far Bar. Their other restaurant, Sake Dojo, opened a few doors down in 2018, where Jill also worked while practicing occupational therapy.

Jill loved being part of the Little Tokyo community: coordinating events, connecting with regulars, managing social media and outreach, and being with her father. She even recruited her fiancée to do dishes and mop floors.

“It was great to spend time with my dad — we’d talk and have dinner every day. I have always liked the social aspect of food service, engaging with people of different backgrounds, both the staff and the patrons,” she says.

When COVID-19 hit, bars and restaurants endured waves of shutdowns, disruptions, and changing protocols. Paring their staff down to one, Jill and Don had to figure out how to stay open. They gave up accepting credit cards to save on fees, sold off inventory, put seats outdoors, dismantled them, and reinstalled them. The whole family pitched in on holidays when orders flooded in for takeout.

A PPP loan enabled them to rehire some staff at reduced hours, keeping employees’ families afloat.

The Little Tokyo Service Center (LTSC), a broad-based community support center, also swung into action. Volunteers stepped in to help with marketing and business advice, Zooming weekly with Don, Jill, and other business owners. LTSC also established the Little Tokyo Eats program, which enlisted the Taharas and others to feed local seniors, making 80-120 meals a week. Seniors only paid $3 for a meal delivered by volunteers. “This shows the innovation and quick thinking of the community,” says Jill.

Creativity and community intertwined. That supportive, innovative spirit animates Jill in her new home in Washington, DC; she moved there in October 2020 to be with her fiancée, an ophthalmology resident, and though she works as a pediatric occupational therapist, she still Zooms with her dad's restaurant team and helps him with technology.

“When the rug is pulled out, people can adapt,” Jill says. “Especially when there is a full circle of support: you help the community; the community helps you.”

Sisters Build a Bungkus Empire from Their Backyard

Tara ’11 and Celene ’08 Carrara did not grow up in the food business, but the sisters had “the most magical childhood” in Bali, Indonesia, where they developed a love not only for their home, but also for the food.

COVID-19 caused each of them to pause their careers and reconvene in Los Angeles (Tara was a makeup artist in New York, while Celene worked as a doula throughout LA). They were ecstatic to be reunited but had to rethink their lives.

One day during quarantine, their mom and grandmother brought home fresh banana leaves, and Bungkus Bagus was born.

“Bungkus” is the Indonesian word for snack, usually a substantial combination of rice and meats, wrapped neatly in a banana leaf for maximum portability. “Bagus” means good. In the early days of the pandemic as the sisters contemplated what to do with their suddenly un-busy lives , Celene created a Bungkus for her clients, who just happened to be chefs at Bestia.

The chefs encouraged Celene and Tara to try their hands at making more of their Bungkus. The Carrara sisters sourced authentic ingredients, perfected their recipes, and created a popup takeout spot in their mom’s Glendale driveway. What started as a one-off idea has become a business, with catering gigs and plans for the future.

The Bungkus served by the Carraras are both delicious and a work of art; combining those traits is, according to them, authentically Balinese. It takes a week to shop for and painstakingly prepare the individual elements, which include pork, long bean salad, coconut chicken curry (or jackfruit curry), and a hard-boiled “mother-in-law” egg. These delicacies are molded around the base of a pyramid of flavorful, fragrant rice. Sprinkled with coconut on top, the medley is intricately folded into banana leaves—and devoured by legions of Angelenos desperate for great takeout. Rave reviews have created such a demand that the Carraras constantly sell out within hours of opening online orders. 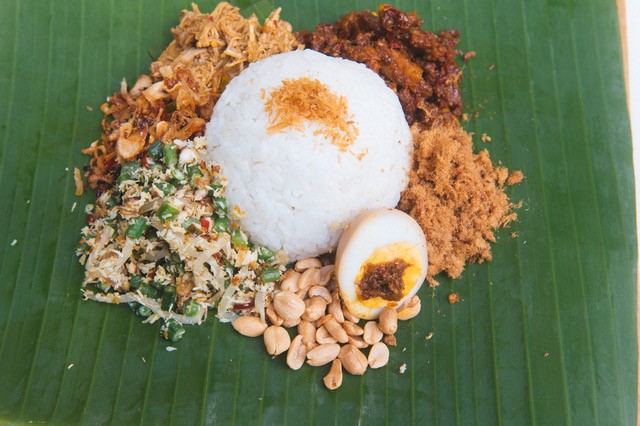 Just to hold a Bungkus in your hand is a delight. Its simple shape has importance and elegance: opening the compact package is akin to unfolding a lotus flower. It’s spicy, homey, crafted fare that’s made with care, artistry, and love.

The sisters call Bungkus Bagus “our love letter to Bali.” Some Indonesian Consulate staff came to a popup and gave their unofficial seal of approval.

“We are the trustees of a special culture, an art of living, of being,” adds Tara. “We have a certain access to Bali that we feel we should share.”

As they got busier, the sisters began to grapple with the complexities of the food business. They divided some tasks and realized they needed more hands. Enter Nina Steenwyk ’06, who connected with the Carraras through mutual friends Bobby Lincoln ’08 and Nick Loui ’08.

Nina is an art historian with a passion for jewelry-making. After earning a master's degree in art business at Sotheby’s in New York, she returned to LA and was hired to fold the Bungkus, an art that greatly benefits from a jeweler’s dexterity, aesthetic sense, and intentionality.

“We make the Bungkus in an assembly line, with love,” says Nina. “Celene told me to sprinkle good intentions along with the coconut on each pyramid of rice, and we do that.”

“Had it not been for the limitations of COVID, we never would have found this format. With a popup, we can commit just a week ahead. We know what our numbers are with online orders. Sustainability for us...it’s everything. We don’t want to waste effort or resources,” says Celene.

“We got lucky,” say the sisters, who now work together daily. Making Balinese food to share is invigorating, and creating a new, successful business is challenging and engaging. “Certain cycles of life repeat themselves—as we enter into our adulthood, Bali has come back, and we’ve come back together,” Celene shares. “It’s a big honor to serve people. It's a little unbelievable that something we love so much can bring people so much joy.”

Do you have a unique story to share? We’re seeking stories and submissions from Prep alumni for our series, What Have You Been Up to During Stay-At-Home? What have you been making, creating, building, tinkering with, writing, baking, or learning? Send us an email at communications@flintridgeprep.org with a short blurb, some photos or video, and any other information. Your story could be shared on Prep’s social media or our print magazine PrepTalk.

Go Back to Main News Page