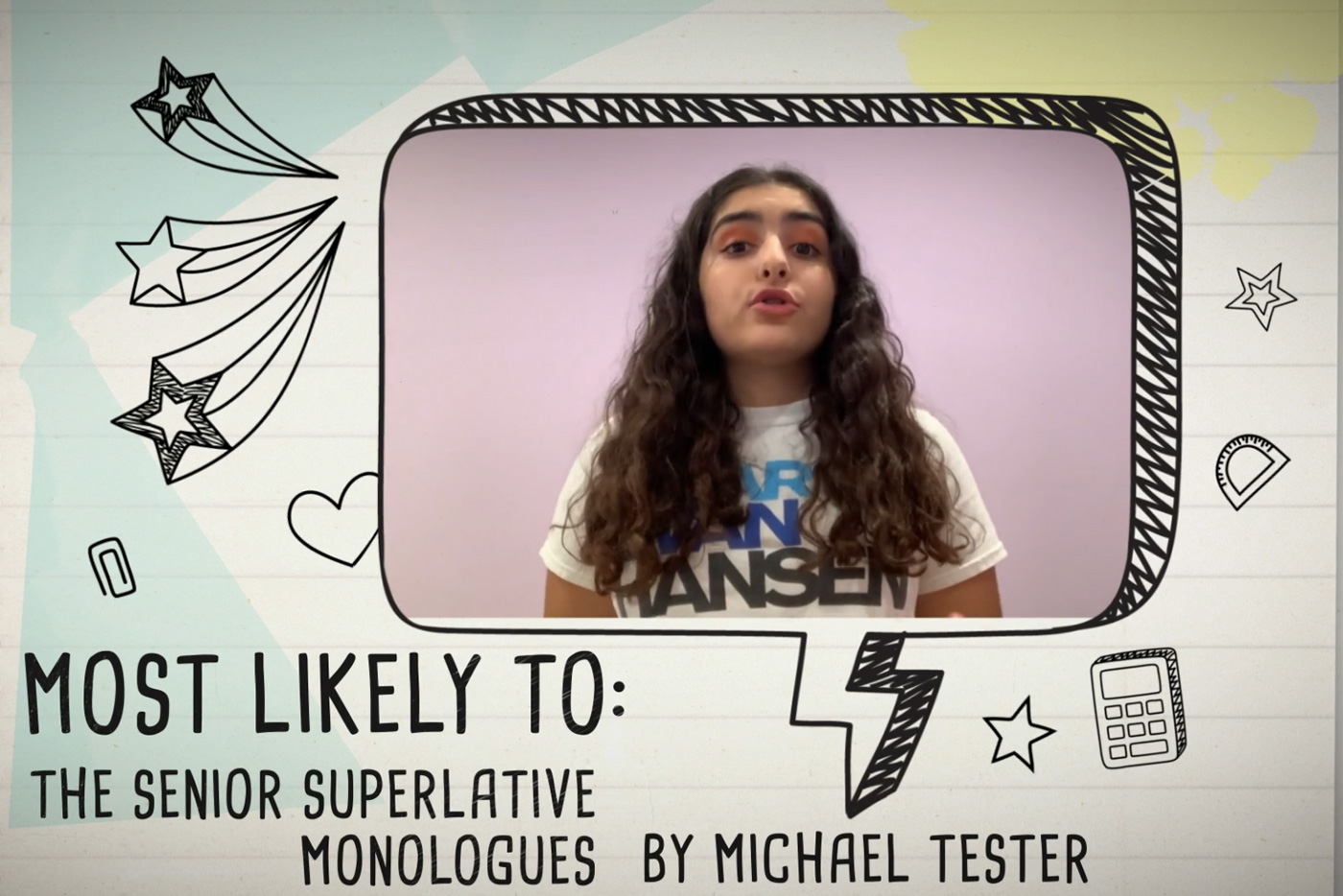 With a lot of grit, creativity, ingenuity, and humor, the Fall Play “Most Likely To: A Senior Superlative Monologues” debuted to a crowd over Zoom, running November 5 through 7. Audience members were able to interact with the characters and comment live while watching the full play. There was even a vote for who was the ‘best’ of the superlatives, with some hilarious impromptu acceptance speeches.

Knowing that this year’s Fall Play would most likely be virtual, Performing Arts teacher and Fall Play Director Jen Bascom spent the summer combing through countless plays and scripts to find the best work that would fit the rather unusual stage of Zoom. She settled on “Most Likely To” which was written by Michael Tester entirely in monologue form. The monologues allowed each actor to express their character and even find creative ways to bring each of their performances together, whether it was a group Zoom or splicing together scenes. The actors played into and upended those quintessential clichés of high school identities, like Most Popular and Best Hair, to less obvious ones, like Most Mathematical.

After making the big decision of what the play would be, directing and rehearsing were the next challenges. Since the actors were recording themselves at home, Bascom says they learned a bit more about film technique and being their own camera person. “They learned how to shoot, how to set up a frame, light themselves, and use the external recording device while on Zoom with me,” Bascom shares. “They were learning how to create an environment that supports their story. I would ask them, ‘Why would your character be in front of a white wall? What does that tell the audience?’ A lot of them learned more than what they signed up for, but they should be so proud of themselves for accomplishing all of this.”

Actor Gabi Wrighten ’21 notes that while it was a little different at first to record her performance, it didn’t feel too different from how other plays have gone. “In any of the plays I do in the auditorium, it’s usually me and one other person,” she says. “It was kind of the same, except I wasn’t in the auditorium, I was in my room.”

Wrighten played two characters within the play – something she’d never done before in Prep productions. In fact, a fair amount of the actors played multiple characters, which led to its own camaraderie-building as they tried to find ways to distinguish themselves on the virtual stage.

“Everyone was really good about helping each other make their characters different from each other,” Wrighten shares. “For me, that was really with costumes and with the tone and range of my voice. For some other people, their characters were different enough in the script that they could just change how they read it. Both of mine just had to be similar, attitude-wise, so we had to make more visual choices.”

One of Wrighten’s characters, whose superlative was Best Hair, had a very blasé attitude with an emo look to boot. “I had so much fun with this character that I didn’t expect, as I went into it thinking I was going to hate the character,” Wrighten says. “Once we really workshopped the character, I realized it was almost half of me. I already paint my nails black. I’ve always wanted a nose ring. It felt like I was playing a side of myself that I don’t let out.”

Wrighten acknowledges that what was notably different was that they weren’t together every afternoon rehearsing in Norris Auditorium, like they normally do. But even Wrighten shares that she, her castmates, and Bascom made it work. “We still managed to make friends. We worked well on creating the same bonds, so that didn’t feel too different,” Wrighten says.

Bascom and the Performing Arts parent volunteers Sarah Montes (parent of Madeline Montes ’21) and Patricia Han (parent of Oscar Yum ’23) collaborated on special activities, swag bags, the traditional Candygrams, and other treats for the students. Montes and Han put together a box for each student that was filled with paper bags, dated with each of the full-cast rehearsals. “They couldn’t open the bag until that day and when we did it together over Zoom, all the students had the same treats, toys, and fun gifts,” Bascom says. Montes and Han also put together opening night swag bags, as well as a secret closing night gift that included a cake, poppers, apple cider, and more for their virtual all-cast party.

“That feeling of sharing an experience together and a feeling of togetherness, that’s why they sign up for the play, and they so desperately need this now more than ever,” Bascom says.

Throughout the process, one goal that propelled Bascom was to create a space and opportunity for the actors, tech, and assistant directors to create and express themselves alongside their peers. “It’s such a basic human need to feel part of a tribe, part of a group,” Bascom says.

“One thing I mentioned to them in the last rehearsal is that we’re putting joy out into the world, and they’re a part of something bigger than themselves, which is to spread laughter, celebrate high school, and let the community see that we’re unstoppable,” Bascom expresses. “We don’t get to interact with each as much as we all crave doing, and it’s so fun for the audience to see students they might not have ever taught or interacted with on Zoom.”

Go Back to Main News Page