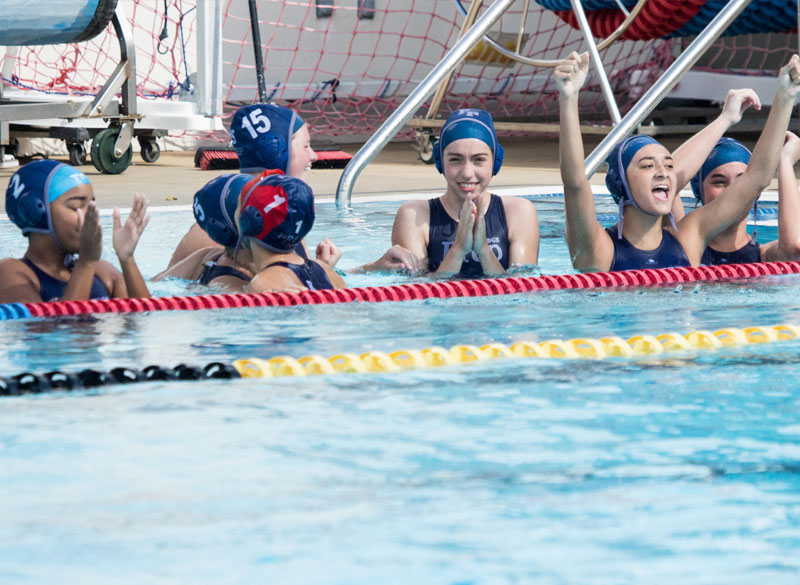 The winter season has come to an end, and the Rebels are turning their attention toward spring preseason.

The girls water polo team made history this season, earning their first-ever spot in the CIF Championship round and securing 2nd place in the Prep League. After winning five consecutive postseason games, the team fell 4-5 to Katella. The team showed immense heart during the playoffs, defeating teams with better records and higher rankings and putting up a close fight against their final undefeated opponent. They show signs of only growing stronger, as just last season, they made their first trip to the playoffs in 15 years.

A couple of upsets made for a tough season end for both girls soccer and girls basketball. The soccer squad entered playoffs favored to take home another CIF Championship title but the team was stopped short in the round of 16. Ranked 46th in state and 115th nationally, the Rebels made it through the season undefeated both in league and overall, with record-breaking goal counts and 12 shutout games. After 22 victories, the girls lost to Moorpark. Between an unfortunate corner kick deflection and 13 heroic saves by Moorpark’s goalie, the game ended in a 1-2 score and a season cut short. However, their efforts resulted in 168 goals this year—nearing the CIF-SS record of 177—and came away with another Prep League Championship title.

On the basketball court, the girls were stopped in the semifinal round by Lakeside, where they lost 51-60. They entered the game with a 12-0 league record, 24-3 overall, and a state ranking of 58. The matchup was tough. Lakeside’s state ranking was 14. The Rebels entered the 4th quarter looking strong with a rallying spirit, but several missed 3-pointers combined with some last-minute opposing shots made for disappointment at the final buzzer. Nevertheless, the girls finished the season with their 6th consecutive Prep League title and several victories against high-ranking teams. The team headed to CIF State yesterday, winning their first round match against Santa Margarita 51-36. Their next game is Thursday, Feb. 28 against Mark Keppel.

On the boys’ side, Prep basketball was stopped in round I of CIF this year, with a 36-49 loss against Temple City (8-2 league, 19-10 overall). The boys had put up a 5-3 league record, 14-12 overall, and had some ups and downs toward the end of the season. Consistently showing perseverance and rallying from behind, their season finished with a 2nd place League finish and two games ending in wins at the buzzer.

After hitting a 5-1 league record, 14-7-1 overall, boys soccer was brought down in round II of playoffs. After 5 consecutive late-season wins—including a huge 2-0 win against Poly on Senior Day—the boys started off postseason looking strong. They took down Aquinas in round I with a 1-0 score, but fell to Pacific (10-1-1, 18-8-1) in round II with a 0-3 tally. But despite some challenging matchups, they earned their 3rd consecutive Prep League Championship title.