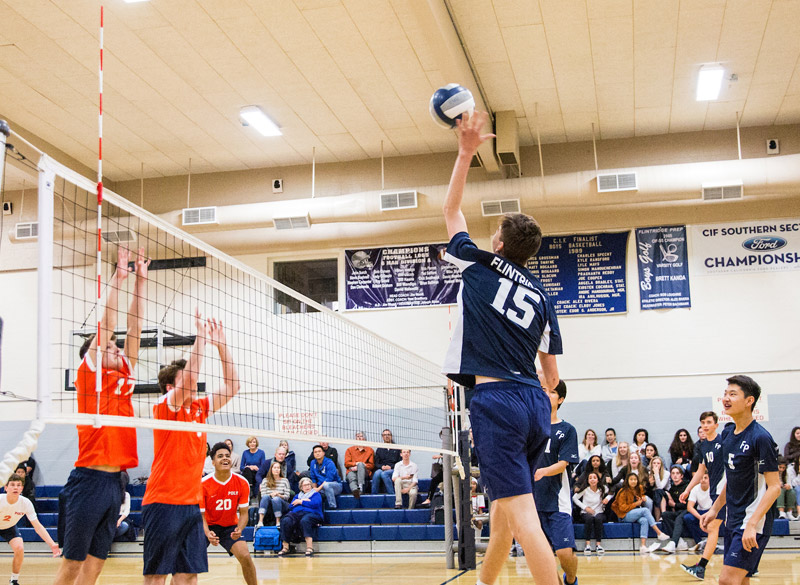 The weather’s warm and the Prep League finals are in full swing!

It’s been another banner week for the boys and girls swimming teams. Both teams made history again, winning the league finals. This is the sixth consecutive Prep League title for the boys (4-0 in league), and the second consecutive title for the girls (6-0 in league). Winston Chen nabbed two individual wins and gave a boost to the boys’ medley and freestyle relays. Coming off their major win last year, the girls’ squad made a stunning finals debut. Now, the team gears up for next week’s CIF prelims on May 1.

Boys’ volleyball remains at the top after Tuesday’s win against Poly, which saw star performances from Luke Stiles and AJ Nicassio. The Rebels gained their seventh straight league championship after last week’s game against Chadwick and are well on their way to CIF. Cheer them on at Friday’s away game at Crescenta Valley!

Over at the Liberty League, boys’ varsity tennis clinched a 10-8 victory over Chadwick, and will kick off finals and the first round of CIF next week. Andrew Megerdichian and Loran Baxter, who make up the number one doubles team, secured a 6-0 win across all three matches.

Track & field varsity teams gave strong performances at the league finals, with varsity boys earning fourth place with a score of 29 and varsity girls securing third place at 81. Chase Sullivan from the girls’ squad qualified for four events at CIF, and many of her teammates will join her at the CIF prelims on May 4.

Rebels baseball (14-7, 7-3) had an early 3-0 lead in last week’s game against Poly, and stayed strong in the fifth inning, but Poly pulled ahead to win the championship. Despite the loss, the team will face off with Rio Hondo Prep on Friday. Don’t forget to come out and support varsity baseball at their home game for Pack the Place! Go Rebels!