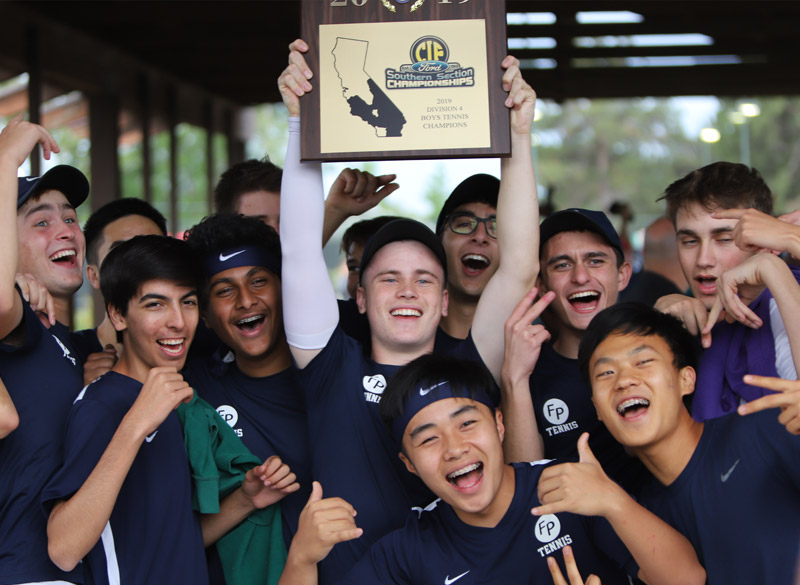 What an incredible end to the boys’ varsity tennis season, who can now call themselves CIF Division Champions! The Rebels celebrated their first division title in the program’s history in a stunning upset of 10-8 against the number one seed Maranatha.

After finishing third in the Liberty League, the team executed a winning streak against California Math and Science Academy, Jurupa Valley, Segerstorm and Bishop Montgomery on May 10, 2019. According to the Glendale News-Press, Prep’s tennis team is the “first area time to win a boys’ tennis title since Hoover High captured a Division I championship in 2002.” The team’s top three singles players were all victorious in their sets against the Minutemen, including No. 1 singles Gillis Linde ’19 (6-1, 6-4 and 6-0), No. 2 singles Andrew Megerdichian ’21 (6-1, 6-1 and 6-1) and No. 3 singles Derek Tran ’20. Doubles team Loran Baxter Mercado ’22 and William Lanstra ’22 brought it home, beating two of Maranatha’s top doubles players duos. This Friday, May 17, the team is playing at the CIF Individual Sectionals in Carpinteria – send them cheers from afar!

At the Track & Field CIF Southern Section Division Finals on Saturday, May 11, 2019, Flintridge Prep came out strong as they raced against dozens of schools at El Camino College. The Rebels sent their qualifiers to the Division IV Finals, where Sebastian Evans ’19 placed 8th in the boys’ 800 (2:05.53) and Chase Sullivan ’22 finished in 5th in the girls’ triple jump, earning a 34-9 jump.

Now that the season is almost done for the spring sports teams, we’d like to take a moment to celebrate all our athletes and their incredible performances this season. Whether the Rebels are making history, solidifying their legacy or carrying on tradition, this season was one for the books.

Finally, a special congratulations to all the senior athletes!