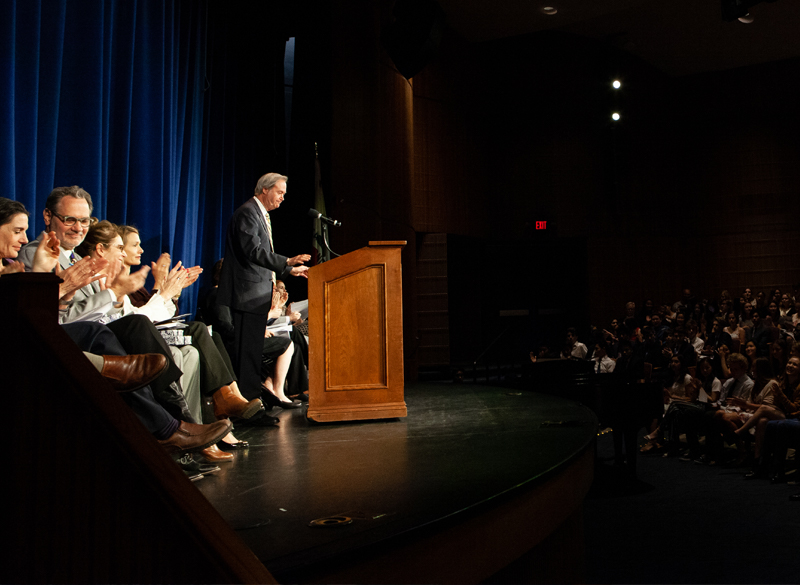 At this year’s Spring Awards Assembly, the whole community came together to honor its students and faculty. The event opened with the special presentation of the Class of 1987 Award to Alex Rivera.

Established by the school’s last sixth grade class in 1981, the award recognizes a faculty member who has given outstanding service to the school. Nominated by faculty and then selected by the entire student body, this year’s recipient dedicated 41 years to the school, both as athletic director, coach, and director of athletics initiatives and as a fierce advocate for his students. Though Rivera may be retiring this year, his impact on the community is renowned. “I’m humbled by this award,” Rivera said after receiving the plaque, and a big hug, from Peter Bachmann. “It means a lot to represent not only you guys out here, but everyone that’s come through Flintridge Prep, alumni, students, faculty and more. Very humbled, love you, and I won’t say goodbye.”

Recognizing another member of the athletics department, the Scott Studenmund ’08 Memorial Award was given to Sean Beattie, Prep’s volleyball coach, physical education department chair and middle school athletic director who will become athletic director in fall 2019. As Bachmann presented the award, he noted Beattie’s long-standing dedication to the school.

“For the past 14 years, our Studenmund plaque winner has, as a teacher and department head, elevated physical education to highlight not only health and activity, but overall human development for life,” Bachmann said. “For the past 23 years, as a coach of multiple sports, at all levels, with boys and girls, he has applied his values to athletic competition, most recently leading the boys’ volleyball team to CIF semifinals. Our recipient coached Scott Studenmund in the middle school, has honored him and celebrates his legacy. As he assumes the mantle of athletic director next year, he will continue to head his volleyball teams, a commitment Scott would have saluted.”

Holding back tears, Beattie thanked the crowd. “23 years ago, Alex trusted me when I was like, 19, to come on campus and coach. I do it because I love it, I do it because I love you guys, and I just want to thank everybody,” Beattie shared. His daughter was in the audience, ready to congratulate him on the honor. He closed his speech to resounding applause, saying, “Keep playing sports for me, that’d be great.”

This year’s Detoy Award, given to a faculty, administration or staff member for outstanding personal and professional contributions to the school, went to English faculty member and Pulitzer Prize-winning Mark Salzman, who is known for playing his cello while his students write. Ben Grable ’20 received the JP Blecksmith ’03 Memorial Award for embodying the qualities of leadership, scholarship, athletic commitment and public service that James Patrick Blecksmith possessed, before giving his life for his country in 2004 in Iraq.

The ceremony continued its celebration of students, recognizing their academic achievements, community service, artistic talent and love of learning. Read below for the full list of award recipients.

As is tradition, the Spring Awards Assembly ended with the ceremonious passing of the torch from the graduating seniors to the rising seniors, who ran to the senior lawn to take their rightful place. Though they had to fight through saran wrap and other obstacles the seniors installed for their annual prank, the newly minted senior Class of 2020 excitedly took on their role as campus leaders.