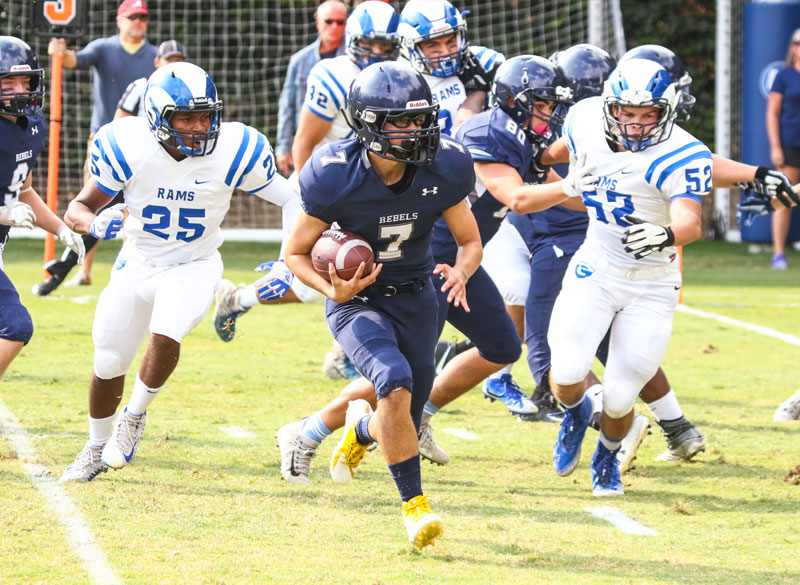 Girls varsity volleyball has been quite busy these past few days. After last week’s 3-1 victory against Providence, the squad secured a home advantage over Alhambra on September 3, winning all three sets (25-11, 25-14, 25-10). Traveling the next day to Westridge, they boldly took to the court with strong wins in the first two sets, but the Tigers rallied to beat Prep 2-3. Today, they’ll be playing Temple City at the Prep Gym, so be sure to cheer on the girls as they take on the Rams!

Prep’s football team made its season debut on Friday, August 30 on Memorial Field after a long summer of training—and they did not disappoint. In a nonleague game against Hesperia Christian, Prep shook off the dust from last year and beat the Patriots to a cool 58-8. The eight-person team held off the Patriots from the beginning with an impassable defense that kept their competitors from moving beyond the 32-yard mark for most of the game. Tommy Porter ’21 made a 13-yard run in the first quarter, showing off his chops despite last season’s injury. Making a splash in his first game as a starter, Max Gitlin ’20 brought the team three touchdowns. Today, the team will face Sage Hill down at the school’s Newport Beach campus.

Check back next week for our weekly roundup and don’t forget to support all our teams this fall!