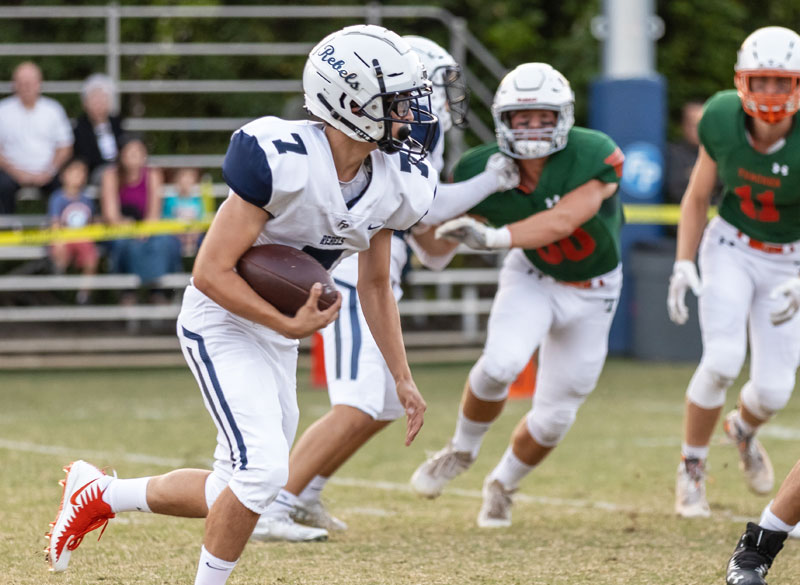 Varsity football remains undefeated after winning last Saturday’s game against Cate. The Rams were no match for a tight Rebels offense. Prep secured a 48-26 victory, with four touchdowns from Max Gitlin ’20, nine passes and two touchdowns from Zach Kim ’21 and six receptions and two touchdowns from Ben Grable ’20. Today, the football team left early for Catalina Island, where they’ll take on the Avalon Lancers tonight. The Rebels look to maintain their No. 3 spot in the CIF Southern Section Division I in the nonleague game.

It was quite a week for girls volleyball, who took on San Marino, Chadwick and Providence back to back. On Monday, the team picked up a nonleague victory against San Marino, defeating them 3-1 (19-25, 25-21, 20-10, 25-14). Returning home on Tuesday and Thursday, they received extra support in the stands from their classmates, parents and friends. In the match against visiting Chadwick, the Rebels had an early lead in the first two sets. During the first set, Kaitlyn Chen ’20 made six kills that helped the Rebels catch an early lead. The match saw strong performances from Elise Desjarlais ’22, who led with 16 kills, and Alex Kyriakakis ’20 and Jada Gritton ’20, who assisted with 10 kills each. By the third set, though, the Dolphins rallied to beat Prep 3-2. During Thursday’s Pack the Place game, which also happened to be a pink out for breast cancer awareness, the team kept Providence on their toes, but fell to the Pioneers in the end. They’re now 12-5 overall and 4-5 in league.

Girls tennis gained a league victory against Providence this week. In a home game versus the Pioneers, Prep eased into a 14-4 win. In a match against the Mayfield Cubs, though, the girls fell 5-13. Girls tennis is now 4-3 this season, 1-2 in league.

Next Thursday, October 10, the girls tennis match against Poly is a Pack the Place game. Support your Prep athletes and cheer on the tennis team!