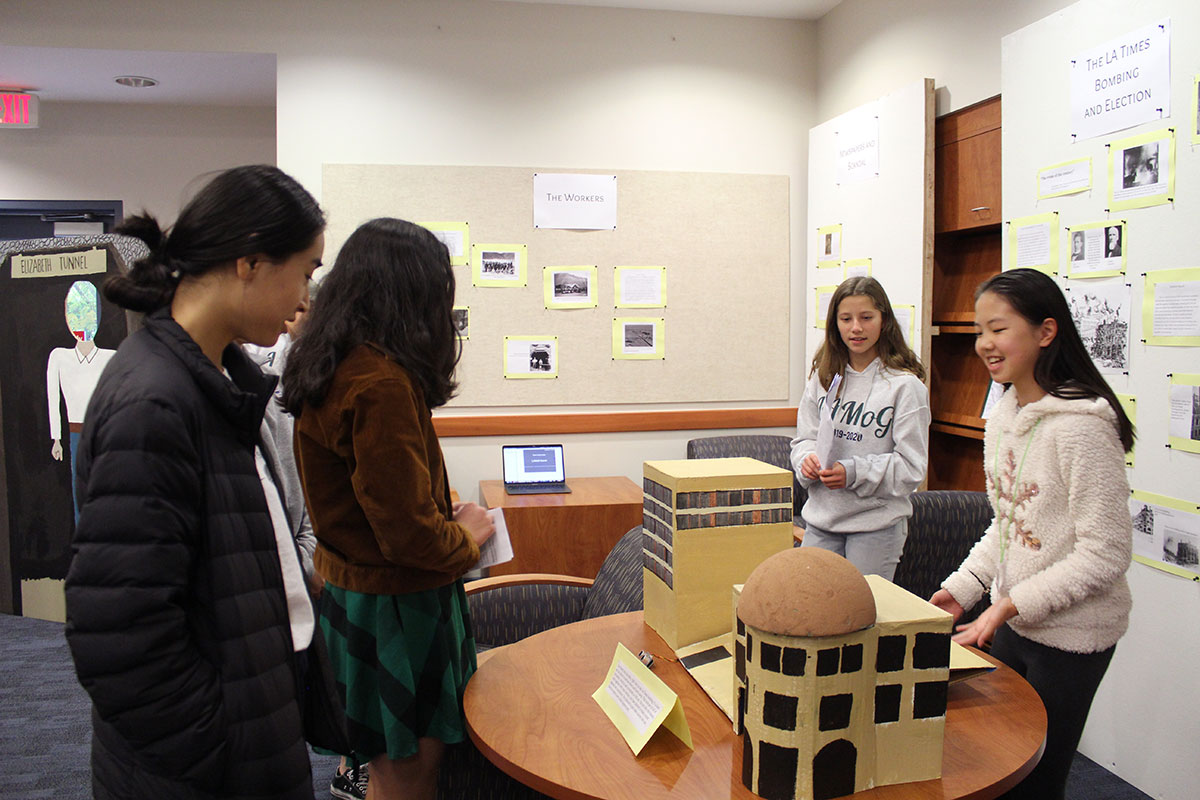 Last week, 7th grade history students hosted the Prep community at their Los Angeles Museum of Geography, an entirely student-created and student-run museum that delves into the history of Los Angeles and its diverse communities and landscape.

Since it debuted in December 2017, the Los Angeles Museum of Geography—better known as LA MoG—has provided Prep’s 7th grade history students with the opportunity to research, plan, design and curate a museum that explores events, people and issues that are uniquely LA. It’s all hands on deck for the 7th graders, who are in charge of various tasks, including writing text for the museum labels, organizing their peers, fielding questions from museum guests, running the museum café and store and marketing the event on social media.

This year’s main exhibit focused on the fraught history of the construction of the Los Angeles Aqueduct with a series of interactive exhibits in the Chandramohan Library. Student docents guided guests through the timeline of the decades-long California water wars, touching upon the major actors and events that led to Los Angeles becoming the sprawling metropolis it is today.

The museum also included new features this year, including a science section on nutrition, a documentary screening and a giant 3D jigsaw puzzle and model of Los Angeles regions.

History teacher and LA MoG director Will Bellaimey collaborated with STEAM Coordinator Dr. Shane Frewen on creating the 3D puzzle. The two recruited 9th graders during an open community block this fall, who used a computer model and a jigsaw cutter to create large, wood puzzle pieces that represent LA’s major regions. A group of 7th graders then mapped out the LA landscape across the wood blocks, assembling papier-mâché representations of the San Gabriel mountains and 3D-printing famous architectural landmarks, including Griffith Observatory, LA City Hall and Pasadena City Hall.

Taking over the floor in the Atrium, the map also provided the visual backdrop to the Neighborhood Mysteries gallery, in which students selected and investigated strange stories and events that occurred throughout LA history.

“Every 7th grader on the first day of school got a book about their neighborhood. The whole idea was ‘learn as much as you can about your neighborhood, and from there, come up with a mystery,’” explained Bellaimey. “Part of what this was about was teaching kids to go into historical newspaper archives, so we worked with our librarians to teach them about the different kinds of databases they can go into. Combined with the giant 3D jigsaw puzzle, the students explored all the different neighborhoods of LA.”

“Now that we’ve done the [3D map and jigsaw puzzle] once, it’s really fun to now have the students ask each other, what are your dreams for this? Right now, the ideas are as big as we want them to be, and we’ll be thinking about how we continue to improve the museum to make it deeper and more meaningful,” Bellaimey said.