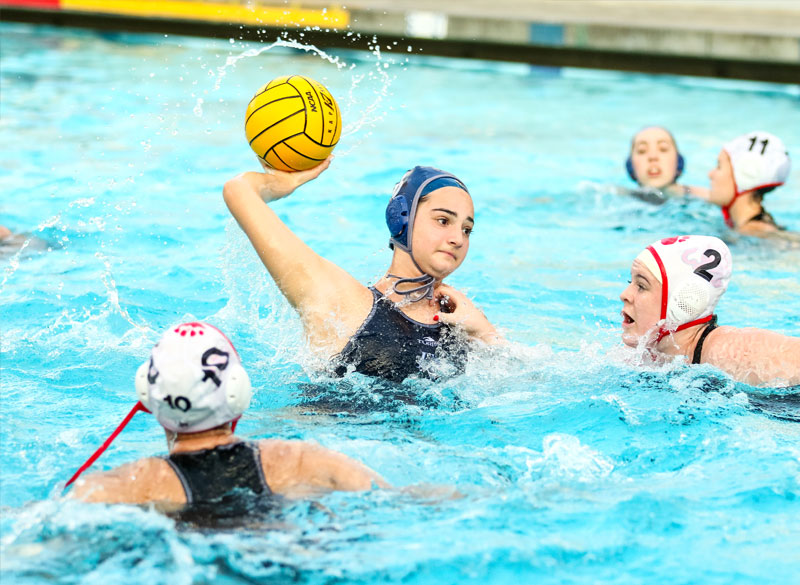 Winter break might have been a time for rest, but our winter sports teams were playing hard in preseason games and tournaments before kicking off league matches this week.

Girls water polo made quite the splash in the Prep Pool on Tuesday, January 7 against Mayfield, beating the Cubs 21-11. They quickly followed up on Wednesday with a blistering takedown of Milken down at UCLA. It was a quick match—only 28 minutes—and the team took full advantage of their defense, preventing Milken from gaining any goals. The girls won 20-0, making them 4-1 in league. Today, they’re challenging rival Poly at a home game in the Prep Pool. Last year, the team struggled to topple the Panthers, but they’re up to the challenge. Cheer them on this afternoon!

Boys soccer clinched a 2-1 nonleague victory over Palmdale Aerospace Academy last week in a post-New Year’s matchup. Simon Siskel ’20 scored two goals for the team. The team will have a home game against La Salle on Prep’s Athletic Field.

Also dominating the field were girls soccer. On Tuesday, Prep delivered a blow to Mayfield, winning 7-0 in their league opening match. Makenna Dominguez scored four out of the seven goals, catapulting the team to an 11-1-1 record. The team takes on Providence at an away game this afternoon.

In the final preseason game, boys basketball scored a 50-46 win over South Pasadena High School. South Pasadena was ranked the top squad in Division IV-A going into the game on Monday, making them a worthy opponent of Prep’s orchestrated defense and offense. Kevin Ashworth ’20 earned 20 points—an all-team high—and three steals. The teams went head to head, tying at 44 in the fourth quarter. In overtime, Prep made their final attack to win the game, with Matthew Ho ’21 and Jake Woo ’22 making their respective two free-throws in the final seconds. Today, the boys will kick off the league season against Providence, another top-ranked team in Division III-AA and 2018 league champion.

Girls basketball remains at the top, winning the Bonita Tournament in December and playing strong in the Burroughs Tournament. On Thursday, the squad defeated the Mayfield Cubs 63-12 in their first league game of the season. The team came out strong in the first quarter, gaining 17 points over Mayfield’s sole basket. The girls kept up the offense, gaining more points in the third quarter and holding back Mayfield’s offense. Alex Kyrikakis ’20 and Ashley Chea ’23 walked away with 12 points each. Today, the basketball squad will play Providence at an away game.