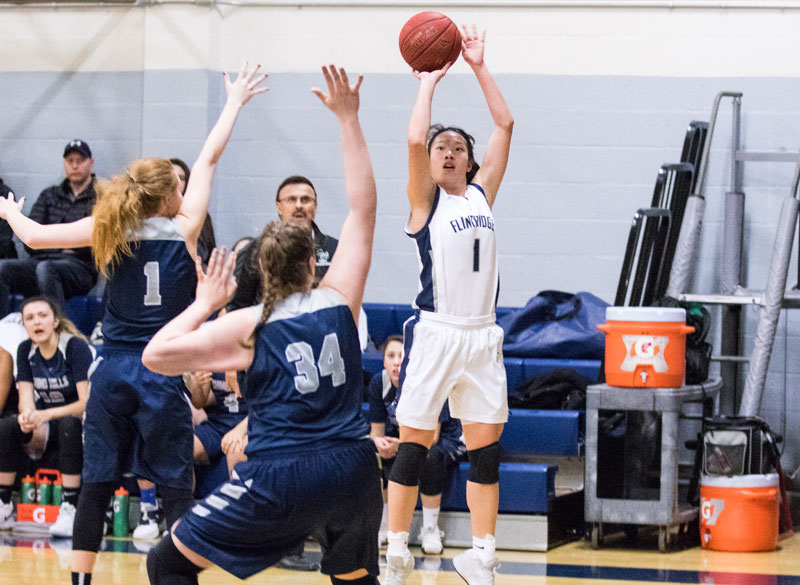 Like many people across Los Angeles and the world, Flintridge Prep athletes are mourning the loss of Lakers legend Kobe Bryant. Prep basketball players Ashley Chea ’23 and Kaitlyn Chen ’20 shared their Kobe Bryant stories and memories with Pasadena Star-News.

Chea first met Bryant when she played club basketball for Cal Storm last summer, and subsequently had many rewarding moments seeing and talking with Bryant at the Mamba Training Facility. Both she and Chen played together on the elite 13-member team (Team Taurasi) and were the only Asian players in addition to Sierra Canyon’s Vanessa Dejesus. Chen also remembers demonstrating a drill while Bryant looked on, and he later shared how impressed he was with her skills.

Though Chea and Chen were deeply devastated by Bryant’s death, the duo rallied themselves and the rest of their Prep teammates at last Tuesday’s game against Providence by sporting tributes to Bryant on their shoes. Read more about Chea and Chen’s memories with Bryant in the Star-News article.

Many of the girls wore Lakers and Bryant jerseys while warming up for Tuesday’s game, where they defeated Providence 65-28. The matchup saw a game-high of 14 points from Sofia Gonzalez ’21, who also made five rebounds. Chen racked in 12 points, 10 rebounds, four steals and four assists. Chea gained seven points and three assists.

On Thursday, the girls squad defeated Mayfield on the Cubs home turf, maintaining their first-place spot in the league. The team has a 10-0 record in league—winning 53 straight league games—and hopes to outwit rival Poly next week.

Out on the field, the girls and boys soccer teams both defeated visiting Sierra Canyon in nonleague games. Boys soccer took out the Trailblazers 5-2, with three goals contributed by Simon Siskel ’20. This win comes after another smooth victory of 6-0 against Chadwick, where Siskel also made three goals. On Thursday, the boys played a tough game against Providence, losing 1-0. It was a difficult blow to the team, who’s been playing hard this season and kept Providence offense at bay throughout the whole game.

Girls soccer defeated Sierra Canyon 3-1, with Makenna Dominguez ’21 making two goals. Currently, the girls are number one in their division, but have arguably been the best team across the whole CIF Southern Section. With a 17-1-1 record, the team hopes to keep up their momentum and take their victories with them to CIF.

Boys basketball defeated Chadwick in a tight game last Friday, gaining 54 points to Chadwick’s 51.  The boys struggled to topple Providence this past Tuesday, though, losing 52-31. Joshua Kim ’22 led the team with 14 points.

Girls water polo has been busy all week, starting off with a home match against Monrovia. Though the girls lost 11-16, they came back the next day to topple La Salle 13-6, defeating the Lancers in their pool. On Wednesday, the girls took on Temple City, but will play them again today at the Los Altos Tournament. They’re also playing St. Lucy’s this afternoon, with more games this weekend.