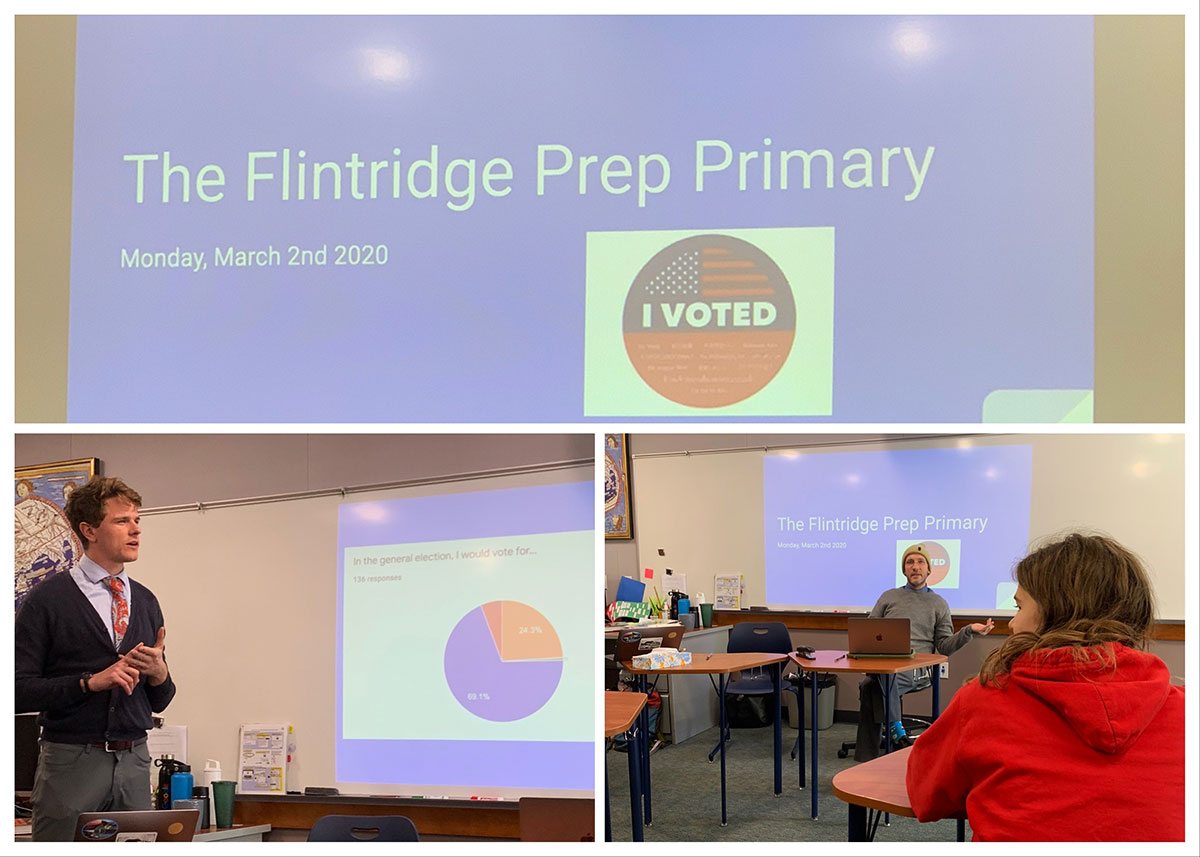 It’s Super Tuesday! Fourteen states will vote today in the Democratic primary election with 1,357 delegates up for grabs. As the voting age remains 18, most, if not all, of Prep students are ineligible to vote. To give students a chance to express their preferences, History Department Chair Josh Perlman and AP Government teacher Will Bellaimey hosted the Flintridge Prep Primary.

Last week, Perlman sent around an anonymous, three-question survey that allowed students, faculty and staff to select their preferred Democratic presidential candidate and share which party they’d vote for in the general election. They also had the opportunity to try out ranked choice voting, a system of particular interest to Bellaimey. All community members were invited to rank primary candidates from favorite to least favorite.

Yesterday, the results were unveiled during a spirited, intellectual dialogue at lunch amongst students and faculty.

After 131 people voted in the classic election system, Senator Bernie Sanders earned 29% of the vote, following by Pete Buttigieg and Senator Elizabeth Warren. The ranked choice, which only had 91 participants, flipped the traditional election’s results, with Buttigieg earning 54.5% and Sanders gaining 45.5%. Seventy percent of participants said they would stay blue in the national election no matter who the candidate is, but roughly a quarter of voters said their decision to remain blue would depend on who the candidate is.

According to Perlman and Bellaimey, the ranked choice results revealed that people were making their choices based on personality, rather than ideology. Ranking results tend to lean towards more moderate candidates.

As one student, Sylvie Shure ’20, noted, ranked voting “selects for the boring option, just as it does in the Academy Awards.” The Motion Picture Academy uses a ranked choice voting (RCV) process, as do four states holding presidential primaries (Alaska, Hawaii, Kansas and Wyoming; Nevada allowed RCV for early voters in their caucus).

The students and their teachers spent much of the discussion talking about potential outcomes of Super Tuesday and individual campaign strategies, as well as recent news about candidates Senator Amy Klobuchar and Buttigieg dropping out and endorsing former Vice President Joe Biden. As Shant Armenian ’20 said, the Flintridge Prep Primary and the surrounding dialogue “was a look at insider politics.”

Just like the Iowa caucus, there was a slight glitch in the system, with the original survey allowing for a write-in option. In true Prep fashion, the write-in was a landslide victory for Otto Von Bismarck, but he was thrown out on a technicality because he is not a U.S. citizen.