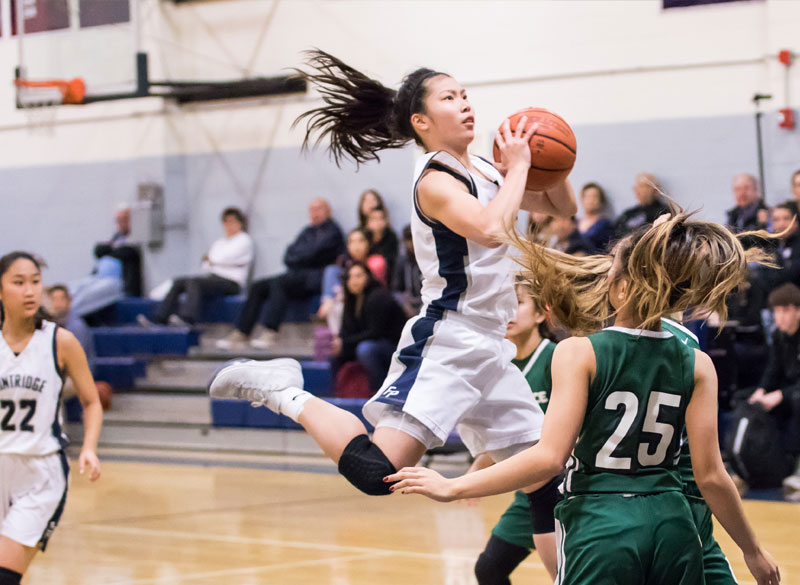 USA TODAY nominated Kaitlyn Chen ’20 as one of the top 11 girls basketball players from Los Angeles high schools. The newspaper announced their nominations for Los Angeles Girls Basketball Player of the Year on April 22 as part of their USA TODAY High School Sports Awards, which will celebrate all the high school student-athlete nominees through an online event on June 18. This is the first Flintridge Prep girls basketball player who has been nominated for this award.

USA TODAY recognized Chen’s incredible senior season, as well as her four years of helping Prep secure league championship titles and their ticket to multiple CIF playoffs. This past year, Chen and the team won their sixth consecutive Prep League championship title, while also achieving a league winning streak with 57 games. USA TODAY called Chen’s performance at the Mark Keppel Tournament noteworthy, writing that “Chen’s all-around game was on display when she went for 23 points and pulled down 11 boards at the Keppel Girls Basketball Tournament, where she made the all-tournament team.”

“A few of my club teammates are on the nominations list, but this hasn’t changed how I feel about playing at Prep,” Chen says. “Prep provided me with a place to develop and grow as a player and a person. Coach Jayme [Chan] and Kevin [Kiyomura] have done such a great job with the Prep girls basketball program and I’m just glad to have been part of it.”

Listing Chen’s accomplishments, you’ll soon find yourself walking through a dizzying array of well-deserved laurels. For four years, the point guard’s been the Prep League’s MVP. She’s been named to the All-CIF 1st team for three years. She’s the leading program scorer with 2,009 points. Throughout her four seasons playing for Prep, the team went to the CIF quarterfinals, semifinals, and finals. They even made it to the California State tournament. Chen also received a nomination to the 2020 McDonald's All-American Games.

“This nomination, along with her NCAA ranking and McDonald’s All-American nomination, are tremendous honors,” says Coach Chan. “It means that Kaitlyn has been recognized as one of the top players in the country. Coaching Kaitlyn has been an absolute pleasure. She puts team goals ahead of personal accolades and leads the team by example.”

Chen will start her freshman year at Princeton University this fall, where she will also play for the Tigers' girls basketball team, a Division I team who competes in the NCAA.

“I'm hoping to continue to improve my skill set and fit in with how Princeton plays. I'm just really excited for next year's season,” shares Chen. Coach Chan echoes Chen’s focus on growth and adds, “This is just the beginning for her, with her work ethic and passion for the game her growth is limitless.”

This June, tune into USA TODAY’s live High School Sports Awards show on June 18 to support and cheer on Chen. The event is free and will feature appearances by top athletes, such as Venus Williams and Gabby Douglas.